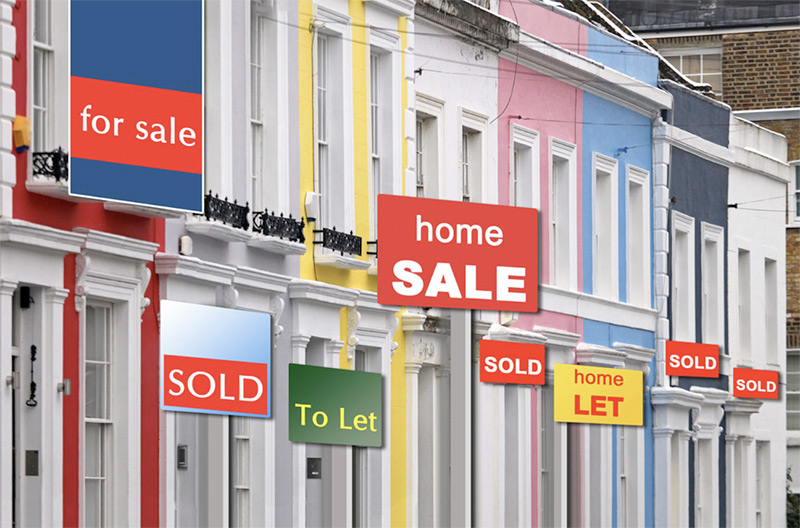 House prices are continuing on an upward trajectory and no-one is completely sure when and if this rise will stop or reverse. So we have prepared this article for you on where we think house prices are today.

Feel free to skip straight to any of the sections below.

The latest Halifax House Prices Index has just been released this week, showing that house prices in the UK continue their dramatic rise since the end of lockdown. Prices in September 2020 were on average 7.3% higher than September 2019, which is an incredible statistic considering the length of time in which we were in lockdown when the sales market was effectively inactive. Prices were also up 1.6% since August and up 3.3% since the end of June, with the average house price almost now at a quarter million of a pounds (£249,870).

To put real money to these percentages, the same average UK house that would have cost £233,000 in September 2019 would now cost £250,000. The percentage change means buyers have to find an extra £17,000 from somewhere, or at least have to request a lender to lend them a large share of it. This £17,000 increase also incorporates a £3,000 reduction in the 4 months between February and June, so in fact properties rose on average by £20,000 in the other eight of the past twelve months.

It has also been reported by the Bank of England that mortgage approvals are at their highest level for 13 years. In August this year there were nearly 85,000 mortgages that got approved, over 19,000 more than in July. By way of comparison to August 2019, where 65,000 mortgages were approved, this is a year on year rise of 29%.

This demonstrates not only a healthy property market, but also a very liquid mortgage market. It has been widely reported that mortgagees are cutting back on the amount of mortgage products available, demanding greater deposits from borrowers and placing more restrictions on the bank of mum and dad. In spite of this though, the numbers seem to show that the mortgage market is currently more buoyant than at any time in the last decade.

4. Where are the Hot Property Areas?

Rightmove has reported that demand has continued to increase in the countryside and coastal towns. The demand for more space supported by the notion that there will be more working from home in the future (even after Covid 19) has led to this trend. In other words, a long commute does not sound so unattractive, if only done for a few days in the week rather than every working day.

The most popular searched areas presently according to Rightmove are as follows:

The largest population in the above nine places is only 10,660 (Aylesford), so presumably there will only be a limited amount of stock on or coming to the market in such locations. It follows then that prices in these areas are set to dramatically increase. Likewise there may be an influx of ex city folk in their local pubs and restaurants sometime soon, subject to lockdown rules of course.

5. Prices between the Cities and Villages

It was always commonly believed that one could eventually sell a property in a city and move out to a bigger place outside of the city for less money. It is of course true that places in the country will have much larger square footage on average compared to the major cities. But what is less true is that prices there will be cheaper.

Indeed according to another set of figures released by Rightmove, people are searching for properties outside of the cities where properties prices are much higher than in the cities themselves. Of people looking to relocate from the 10 cities of Bristol, Birmingham, Edinburgh, Glasgow, Leicester, Liverpool, London, Manchester, Nottingham and Sheffield, in 8 of these cities people were looking to actually pay more in the village or town they were considering to relocate to rather than less (only London and Bristol were the exceptions).

As an example of this, the most common search for people within Liverpool (with an average house price of £170,000 in August 2020) was Aughton in Lancashire which has an average property price of a whopping £377,000. In other words, it seems buyers are prepared to pay a lot more to move out of the cities.

It is commonly felt that this house price spike will not continue. The end of both the furlough scheme in November 2020 and the Stamp Duty Holiday at the end of March 2021 are seen as the potential catalysts to such a decrease.

But the question is will this lead to a decrease in property prices or simply the end of the increases. The end of the furlough scheme of course may have a negative effect if it leads to a significant loss of jobs and economic downturn, although this does presuppose that at least part of the buying rush at the moment is from buyers who are on presently furlough but may be unemployed soon.

This assumption is questionable though. Sure there may be some people who are trying to buy now, as might not be able to do so after November. For most facing job insecurity and possible imminent unemployment however, committing to a buying a house now and taking on a mortgage would not seem likely to be top of their agendas.

Further, it would have proved difficult for such people to have obtained a mortgage in the first place if on furlough, so the welter of successful mortgage applications in August might be better explained to be from applicants who are not on furlough. This being the case, the impact of the end of furlough might be overstated.

The other main point raised is that of the end of the Stamp Duty Holiday. This argument, we assume will have more of a direct effect on prices as people rush to buy and complete before 31 March 2021, leading to a large decrease afterwards.

This is especially so for larger value properties which before the stamp duty holiday faced very onerous stamp duty bills, leading many at that level to adopt the belief that extending their homes rather than moving was a more sensible option. The stamp duty holiday then may have suddenly triggered and reconsideration of such people to now move, as suddenly the higher rates have become less onerous. When stamp duty returns in April 2021 to its previous rates, the view to stay put rather than to move may return, especially if the economy is not performing strongly. This would lead to a decrease at the top of the market, which would cascade down to the other segments of the market

So will houses prices suddenly fall off a cliff next year? Well we are in times when the Bank of England was predicting a 16% decrease in the year following lockdown and so far that just hasn’t happened. If one thing is constant, house prices seem to defy expectations and just do their own thing. They of course are never ring-fenced from the wider economy, but at the same time they do seem to be counter cyclical in nature. Only time will tell the effects of the ending of both the furlough scheme and the stamp duty holiday on house prices. If you would like to sell your property quickly for cash before prices may drop, please contact us at Quick Property Buyer to get your instant cash offer.